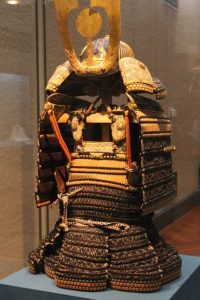 After felt down of Kamakura shogunate, Kenmu Restoration(建武の新政） directly ruled by Emperor Godaigo（後醍醐天皇） aroused opposition from samurai and collapsed when Ashikaga Takauji’s army took control of Kyoto in 1336.

When the army of Ashikaga Takauji entered in Kyoto, the Emperor Godaigo escaped to Mt. Hiei(比叡山） and fought back.  However, the Emperor finally accepted the reconciliation proposed by Ashikaga, and he handed over the Three Sacred Treasures(三種の神器） to Ashikaga Takauji. Ashikaga Takauji, with the background of the Emperor Komyo(光明天皇）, opened a new legitimate Shogunate called Muromachi Shogunate (室町幕府）with the enactment of a new political platform called Kenmu Shikimoku.

The third Shogun Ashikaga Yoshimitsu(足利義満）, was bent on strengthening shogun power. Yoshimitsu brought the Japanese pirates called Wako(倭寇) under his control and began dealings with Korea.

On Kitayama (“北山” the Northern Hills) of Kyoto, Yoshimitsu constructed a villa, which was later called Rokuon-ji Temple (“鹿苑寺”more commonly, Kinkaku-ji Temple”金閣寺”), so the culture around then is occasionally called Kitayama culture after the location.

After the Onin War,(応仁の乱） the eighth Shogun Ashikaga Yoshimasa（足利義政） built a villa in Higashiyama（東山山荘）, Kyoto, where he constructed a silver pavilion after the example of his grandfather Yoshimitsu.