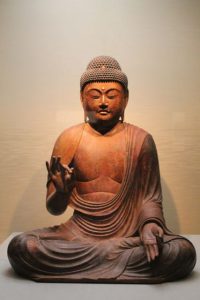 At the end of the Heian period, Insei (“院政”/rule by retired emperor”Joko (上皇)”) based on a father-child relationship with the Emperor began to be conducted instead of Sekkan seiji (“摂関政治”regency) which was mostly rendered by Fujiwara Family.

Because of Insei, the power of Fujiwara family gradually weakened. while Joko was getting stronger and stronger, confrontation gradually emerged between Joko and the Emperor.  Joko and the emperor hired solders respectively to have more power than the other.

Hojo family practice a long and stable shogunate. It is important that Japanese government fought with Mongols who governed wide Chinese continental area and the biggest imperial government in the world at that time.

In the thirteenth century, the Mongols invaded twice, these invasions being called the Bunei engagement of 1274 and the Koan engagement of 1281, so called from the names of the eras in which they occurred.

In addition, Kamakura new Buddhist also generated in Kamakura period.  Honen(法然） of the Jodo sect（浄土宗） and Shinran（親鸞） of the Jodo Shinshu (“浄土真宗”/the True Pure Land Sect of Buddhism) called for, based on Mapco shiso（末法思想）, repeating the name of Buddha in order to be able to go to Amidanyorai (Amitabha Tathagata) at Saiho Gokuraku Jodo (The West Pure Land (of Amida Buddha)) after death.