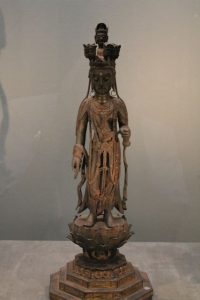 It is said that Choan (長安）which was a capital of Tan dynasty was a model of Heijo-Kyo.

It is in 710, the capital was transferred to Heijo-Kyo. Heijo-kyo was a huge capital whose width was 6km in east and west and whose length was 5km from North to South.

In Nara period when Nara was Heijo-kyo Capital, the city, as the end of the Silk Road, witnessed the flourishing of international Tenpyo culture(天平文化）, and, with magnificent temple buildings standing side by side, the city brought many important cultural assets into the world.

On the other hand, it is said that it was a difficult time to spend the life especially for famers. They suffered by the condition of being overtaxed.  Okura Yamanoue (山上憶良）who was a elegiac poet compiled Hinkyuu-Mondouka (貧窮問答歌）described very poor household for the farmer in Nara period.

In 723, the new law named Sanze isshin law (“三世一身の法”/the law to assure the possession of the reclaimed land for three generations) was established in order to deal with the lack of rice fields. It allowed private ownership of konden for a certain period. However, three generations were too short for the people who cultivate new rice people and the Sanze isshin no ho lost substances.

After Konden einen shizai Law, a number of land owners based on konden (newly developed rice field) emerged over an extensive area.

In 741, Emperor Shomu(聖武天皇） issued the decree to build provincial temples. And finally, he built Todaiji-temple(東大寺） which is famous for Nara no Daibutsu (奈良大仏）.