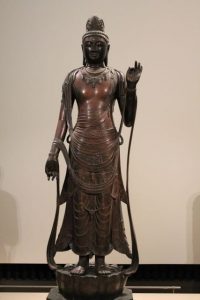 In A.D. 538, a religion named Buddhism had introduced to Japan from Korea(”百済/Kudara”). Buddhist culture, such as Asuka culture and Hakuho culture in the later era, also developed since then.  It is widely assumed that the Soga(蘇我） clan was the first to adopt Buddhism when it was introduced to Japan during the Asuka period.

Although Emperor was the top of the authority at that time, Soga clan had more power than emperors. However, prince Shotoku (聖徳太子）had changed the balance of power.

In 604, Prince Shotoku established a system of twelve courtly ranks, promulgated the Seventeen-Article Constitution, strived to develop Buddhism and laid the foundation for an ideal national system with the emperor as the nation’s center.  Especially after the Taika Reform(大化改新） of 645 the political system shifted to an emperor-centered system.

Since them, various revolutions had been rendered by the authority of the Imperial Court.

“公地公民/System of Complete State Ownership of Land and People”:

The Shoen (“荘園/manor”) and Bemin(“部民/workers”) which belonged to Gozoku (“豪族/local ruling families”) until then were expropriated and all were  decided to belong to Emperor.

A family registration system of ancient times and keicho (“計帳/yearly tax registers”) were prepared and the state-owned public land was lent to the public.

A reform of a system to burden the public with tax and labor service.

The administrative organization of areas generally consisted of Koku（”国/provinces”),Gun(“郡/ districts”) and Ri (“里/villages”) and these were headed by kokushi (“国司/provincial governors”), gunji (“郡司/district managers”) and richo (“里長/village chiefs”) respectively. 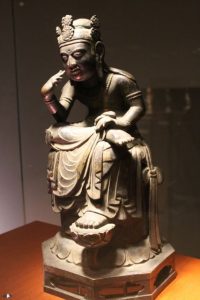 The features of Asuka Culture are “Buddhist” and “International”.  Huge number of Buddha statues had been produced in that area. And it is also said that 法隆寺 (Horyu-ji temple) were influenced by architecture technology of Greece. 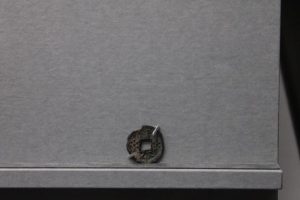 The oldest money coin called “富本銭（ Tomimoto-Sen) had also produced in that era.