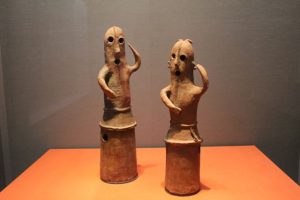 After Yamataikoku in Yayoi Period,  hereditary monarchy succeeded.  When emperors had died, a huge cemetery had been built. Such huge cemetery is called “古墳(Kofun)”. Therefore, there era are called “Kofun Period”.

Around  Kofun, a clay image called “埴輪（Haniwa)” were arranged to protect emperors. 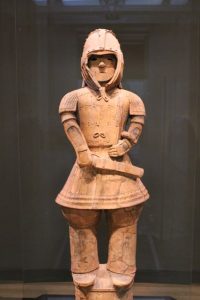 Terra‐cotta warier also protect Kofun. Not only warier, but also horse, house and shrine maiden shaped Haniwas are arranged around Kofun. It is believed that initially, lived people had been mounded with emperor and Haniwas had replaced to lived people gradually. It is said that the emperor retained huge power at that era. 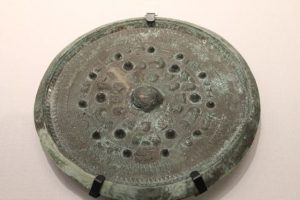 Not only Haniwa, but also bronze mirrors are also mounded with emperor. We could learn a lot of thing about these era from such burial accessories. The above photo is “三角縁神獣鏡”.  Various images are sculptured in the mirror. 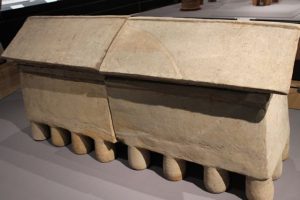 The above photo is an earthenware coffin of Japan’s tumulus-building period, called ‘token’. There were wooden, stone and ceramic coffins and so on depending on the materials used.