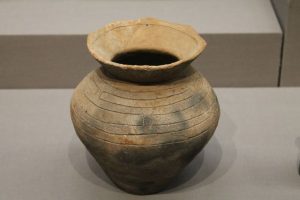 Before rice culture, food was not from agriculture but from nature. We could say that the people were not only depends on nature but also use the wellness of nature for themselves. Various tools began to be used for cultivation.

In addition, bronze tools were also produced. Initially there were only for the purpose of praying. As is often, rice cultivation were depends on weather conditions for mosts of parts. 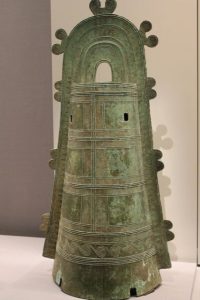 Above photo is a bronze bell-shaped relic from the Yayoi Period of Japan which is called a “Dotaku”.  About 500 dotaku have ever been excavated all over Japan.  Dotaku is considered to be an unearthed article characteristic of Yayoi period and discussions on cultural region and others in Yayoi period according to the distribution have been under way.

Why such discussions are important? Because we still cannot find out the right place where “Yamataikoku” was located.

Yamataikoku means Japanese ancient government that governed more than 300 rural governments. Official historical documents which is called “魏志倭人伝” have been stored in China and according to such documents, Yamataikoku was known by the Chinese for over 300 years, during which time they had friendly communication with each other.

Some people believe such grand governments had been in Kyushu area, and others believe in Nara area. No one know the truth until decisive evidence will be discovered.