It is said that the Japanese island was born around 13,000 years ago which was divided from Eurasian continent because the ice age ended and the sea level began rising corresponding to rises in the atmospheric temperature.

The Japanese archipelago experienced a rise in the sea level of over 100 meters during this period; today it is called “the sea level rise of the Jomon period”. 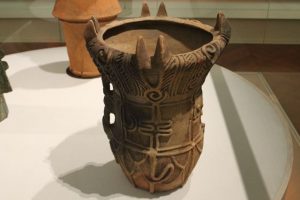 During Jomon Period, Japanese character had not developed yet and it is difficult to find how the people in Jomon period had spent there life.  However we could imagine through research of garbages in some part. 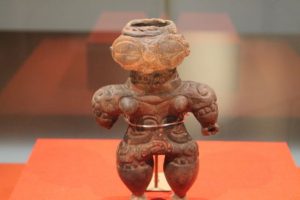 Above picture is one of a clay figure.  You can see a characterictic eye. A clay figure wearing what resembles eye shades used by the Eskimos which was excavated in Aomori Prefecture in Japan.

Nowadays, it is believed that these clay figures were worships idols for the purpose of pray for women.