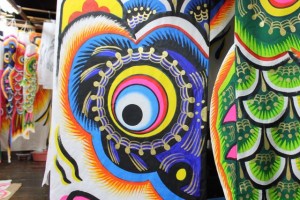 KOINOBORI is a banner of carp shape. It is used for celebration of “Tango no Sekku” the boy’s festival on May 5 every year. 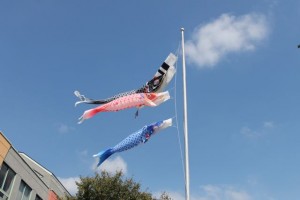 KOINOBORI in the sky. It looks as if carp swimming in the sky, doesn’t it? 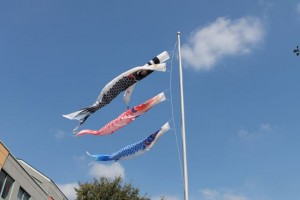 Followings are explanation from paper given by “橋本弥喜智商店”. “橋本弥喜智商店” is located on Kazo city, Saitama which is famous for a manufacturing area of KOINOBORI. Almost 70 % of KOINOBORI in Japan is made in Kazo city.

Especially, “橋本弥喜智商店” has its history to present its branded KOINOBORI named “武州”. The history of “橋本弥喜智商店 is more than 100 years and the president of, and also 3rd successor of,  “橋本弥喜智商店”  is designated as “伝統工芸士” in Saitama. 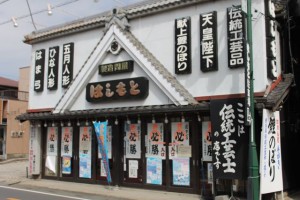 The Boy’s festival is celebrated on May 5. In Japanese it is called TANGO NO SEKKU, which is one of Japan’s main annual festivals. On this day, paper or cloth streamers in the shape of carp (called KOINOBORI) are hoisted up tall bamboo poles in the yards of families who have sons. The parents hope that their boys will grow up healthy and strong by overcoming all obstacles, just like a carp, which fight its way up swift streams and little waterfalls. Some of the cloth carp are 10 meters (32.8ft) long. It is a magnificent sight to see KOINOBORI of various colors swimming in the air. 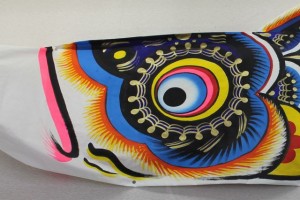 Carp have been symbol of “growth” and “brave” because it had been thought as child of Dragon. The origin of those way of thought is from China. People in Japan embodied such ancient folklore by forming shape of KOINOBORI. 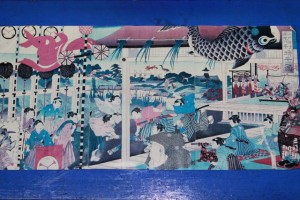 The above picture drew a TANGO NO SEKKU in Edo period. That was a big event for upper class family who have boys. You can find black KOINOBORI in the picture.

Following subscribers are also quite from the paper given by “橋本弥喜智商店”

<The Origin of KOINOBORI>

In the feudal times (more than 700 years ago), there was custom among Japanese Samurai  families to put flags or servers outside with the family crest on them on May 5 to celebrate their boy’s birth. In the Edo era, as well as flying streamers, they started displaying figures of warriors.

The lowest class in those days was considered to be the oppressed merchant class, however, as they began gaining social and economic power, merchants came up with an idea of putting up paper or cloth streamers in the shape of a carp in opposition to the Samurai’s flags. The carp had been considered to be a special fish with good luck, because of its vigorous fighting spirit. Having carp swimming freely in the blue sky was their way of expressing their desire for freedom. They wished that their sons would grow up strong and healthy by overcoming all difficulties just like the carp, as an old Chinese saying goes, “A carp which has successfully made it through the dragon’s gate will change into dragon”.

This custom has gained great popularity since then, and in Japan today, it still remains as a symbol of one of the traditional festivities.

KOINOBORIs are symbolic figures of May even in Japan these days. KOINOBORI was, originally a simple shape made with inexpensive materials. Since the MEIJI Era, however, it has been developed into rather a modern and sophisticated one, both in materials and colors. 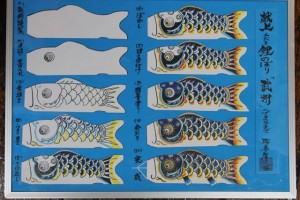 Above pictured is shown the manufacturing process of KOINOBORI. In Kazo city, every KOINOBORI is still made by hands of craftsmen. 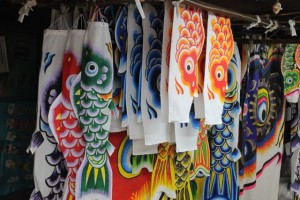 Drawing and drying are repeat 18 times. Thus, KOINOBORI are able to rust against rain and sunshine. 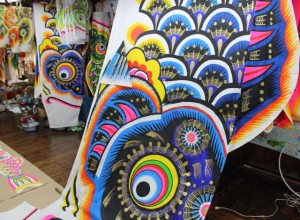 Design of KOINOBORI is classified by various parts such as eye, scales and filet. Each parts are composed by bright colors. 12 colors made from blue, yellow and pink are used to draw KOINOBORI. 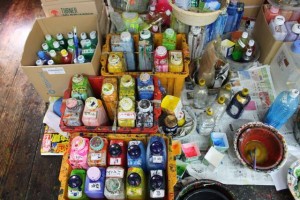 Craftsman makes color by mixing color pigments. It is not dyestuff but pigments. pigments realize textures. 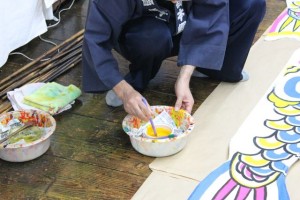 Every drawing process is made by hands. 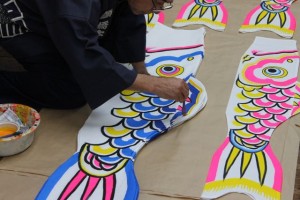 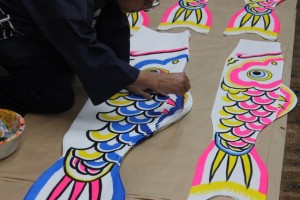 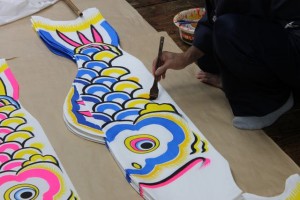 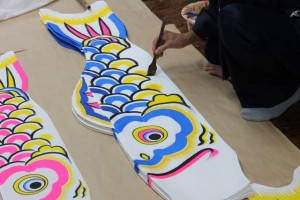 Did you find that each brush the craftsman is using are not the same upon each scene. 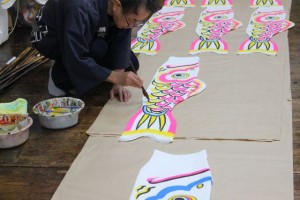 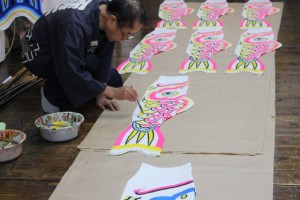 The craftsman drawing very carefully by using his tool upon each scene. 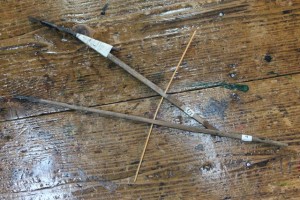 This is compass to draw eye. It is made of bamboo. 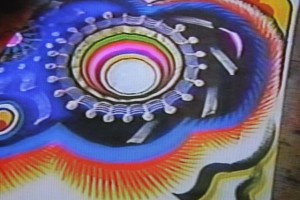 In the edge of the compass, there is brush. To fix the wide angle, craftsman make side bamboo wet by small quantity of water. 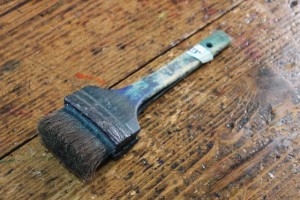 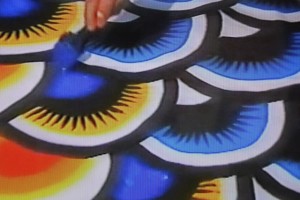 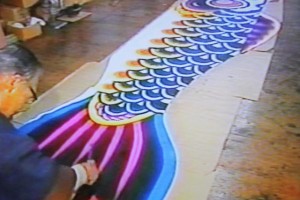 Each brush are also made by hands to be suitable for each KOINOBORI. 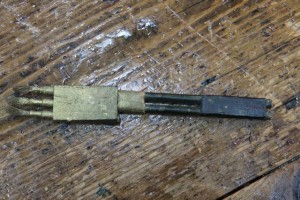 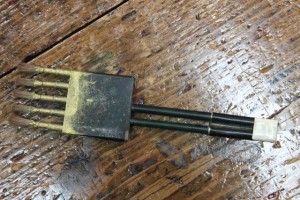 The big KOINOBORI whose length is 111m is swimming in the air. It is annual events held in Kazo city on May 3rd every year. 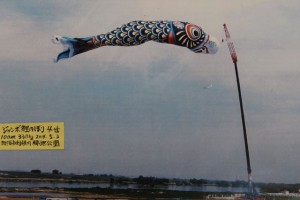 Can you feel how 600kg weight of Koinobori fry into the sky only by power of wind? Yes, it is miracle but also science in nature. 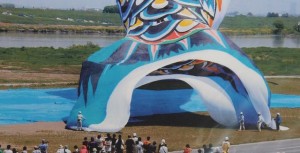 The length of KOINOBORI is longer than aircraft for example, Boeing 747. 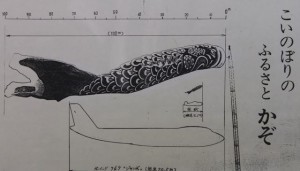 Why such a long KOINOBORI can fry without fuel? It is made by sensitivity of craftsman. However, it is surprising that such sensitivity is along with knowledge of aerodynamics theory. Nowadays, more than 100m length of KOINOBORIs made in Kazo city swam in the air of Germany and Hawaii.

Can you imagine how it was made? It is also made by hands of craftsmen, of course. 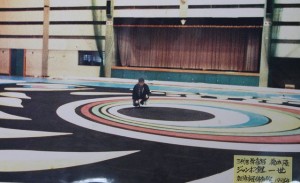 Above pictures are taken at “橋本弥喜智商店”

I heard that Chinese people visited “橋本弥喜智商店” and learned that origin of KOINOBORI is a tale in China. They were glad and proud of it. KOINOBORI is a Japanese traditional culture but it cannot realize without Chinese tale.